Why has North Asia outperformed its South-East Asian peers?

North Asia is reaping the benefits of its effective Covid response but there are longer term
factors behind the region’s outperformance too – by Richard Sennitt, Fund Manager, Asian Equities

This article is an excerpt from our 25th Anniversary booklet celebrating a quarter century of the Schroder Asia Pacific Fund plc. See the full booklet here. 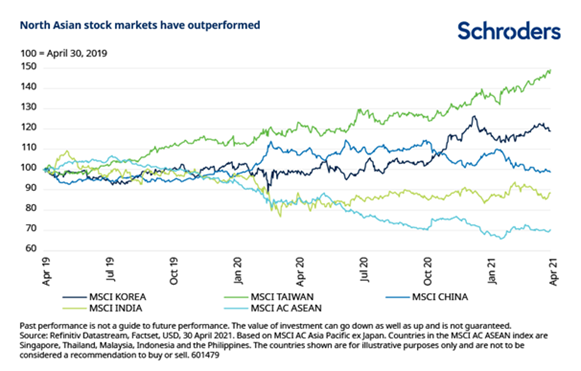 However, it’s not just successful containment of the virus that explains north Asia’s strong recent stock market performance. Another reason is that the kinds of companies that performed well during the pandemic were already well represented in north Asian stock markets.

Take the chart below. The first two columns show the composition of the MSCI AC Asia ex Japan index in 2000 and the second two its composition in 2020. As we can see, north Asia has grown to be a much larger part of the overall index.

Within north Asia, it is the technology (including the internet) related names that have grown, from c.13% of the index to over 40%. By contrast, the tech sector in the rest of Asia has remained small.

Internet platform companies have benefitted from the rapid adoption of new technologies by Asian consumers, who have been arguably less held back by legacy infrastructure compared to the rest of the world. For example, smartphones have facilitated swift growth in areas such as e-commerce and mobile payments. 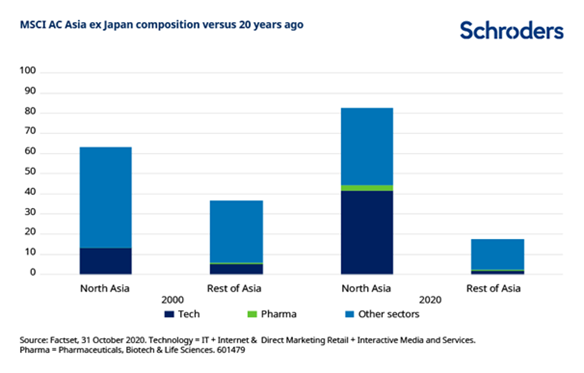 Of course, technology products and services have been in high demand throughout the pandemic. There was a sharp spike in demand for smartphones, tablets and laptops as companies scrambled to supply their employees with devices to work from home.

There was also growth in “play at home” demand for televisions and computer games consoles, as well rising levels of e-commerce and online gaming all driven by reduced mobility. All these trends have been driving strong demand for different types of technology over the past 18 months, contributing to north Asia’s strong performance.

But why is north Asia a technology leader? It didn’t happen by accident. We need to dig into the longer-term factors that meant the region was well-placed to benefit from the trends that arose during the pandemic.

Part of the answer is investment in research & development (R&D). Korea and Taiwan have long been spending more on R&D than their south-east Asian peers, as the chart below shows. Meanwhile, China has increased its spending substantially. 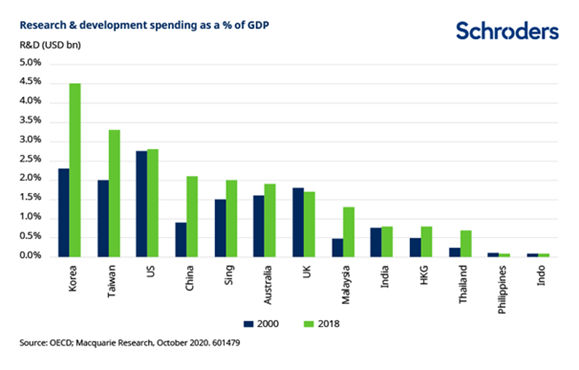 Investment in knowledge industries, like technology, is crucial to helping companies develop and grow. This means north Asia has been better able to adapt to the rapid changes in technology in recent years.

For investment to be effective you need people who know how best to spend it. This brings us to another reason for north Asia’s tech success: education. Graduates with a high quality education are needed to implement the elevated levels of R&D spending.

The chart below shows how China in particular has rapidly increased the number of science and engineering graduates it produces.

South Korea and Taiwan produce a relatively high level of such graduates given their population size. These graduates will have careers lasting for 30-40 years, increasing their knowledge and experience over time and adding value to the companies they work for. 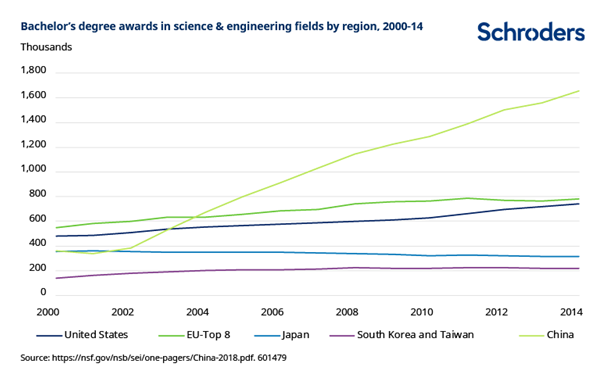 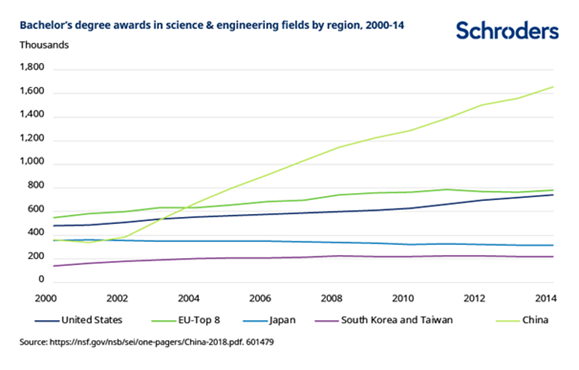 A further reason for north Asia’s outperformance is the ease of starting a business there which is important as new businesses can often improve productivity in the wider economy by introducing new work methods or technologies.

Compared to other emerging markets, it has long been easier to start a new business in Korea or Taiwan, and has become much easier in China. By contrast, entrepreneurs in many south-east Asian nations still face substantial bureaucratic barriers. 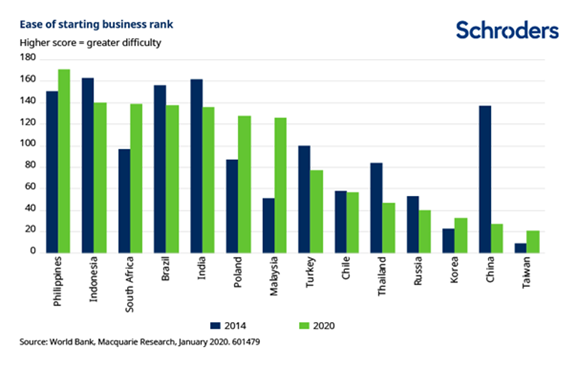 In our view, it is the combination of all these factors – R&D spending, education and ease of starting a business – that has contributed to north Asia’s feat of developing successful technology companies that has been reflected in stock market outperformance. They also stand the region in good stead for the future.

These factors can potentially help north Asia’s economies avoid the “middle income trap”, which sees countries attain a certain level of income but then get stuck there. China especially is no longer the cheap source of labour it once was and it faces increased competition from regional neighbours where manufacturing wages are lower (see left hand chart below). Vietnam in particular has been a beneficiary of this. 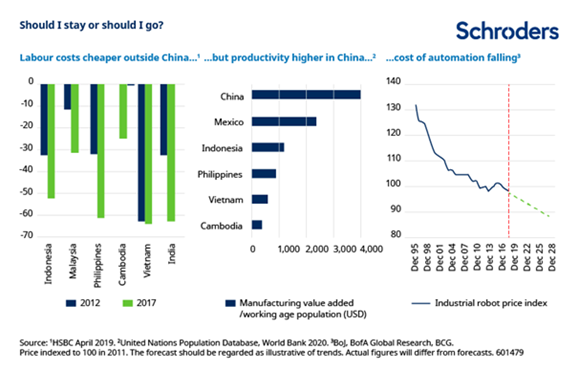 However, cheap labour isn’t necessarily the advantage it once was. As the middle chart above shows, productivity is higher in China than in these regional neighbours. While some companies may choose to switch their production to these lower wage countries, that will generally be lower value-added production. In addition, companies in similar industries draw cluster benefits from being located close to each other. This is particularly the case for industries operating amidst complex supply chains.

And, as the final chart shows, with the cost of automation falling, labour costs may be less important when companies are deciding where to base their production. With its higher R&D spending and educational attainment, north Asia is at the forefront of innovations in automation. In turn, these innovations can help improve productivity further.

Rest of Asia down but not out

Does that mean it’s all doom and gloom for the rest of Asia then? Certainly not. Again, there are both short- and long-term reasons for this.

Taking short-term factors first, many south-east Asian countries also managed the pandemic well but the composition of their economies meant they were unable to draw benefit from this.

For example, Thailand was successful in containing Covid last year, but travel restrictions meant its tourism sector – c.20% of the economy – was very badly affected. There is scope for a sharp rebound in travel and tourism once vaccines are distributed and restrictions lift, giving a near-term uplift to the economy. However, with vaccination rates still relatively low in much of Asia the timing of this rebound remains uncertain given the potential for further outbreaks.

Looking longer term, there are several trends working in favour of the rest of Asia. Demographics is one, with populations much younger on average than their north Asian peers. Urbanisation is another; countries in much of the rest of Asia still have greater scope for urbanisation and the collaboration and innovation benefits that come with it.

Meanwhile, the pandemic has highlighted the benefits of a geographically diversified supply chain. As we’ve seen, companies need to balance China’s higher productivity against its higher labour costs. But security of supply is another consideration. The pandemic may be global but it hasn’t affected every country at the same time. The initial shutdowns in China in early 2020 caused enormous disruption to the supply chains of companies reliant on Chinese production. Shifting some production to other countries could be a prudent step.

The elevated trade tensions of recent years, especially between the US and China, may be another reason why companies could seek to relocate production to other countries.

Lastly, although public markets are currently under represented from a wider technology perspective in south-east Asia, there are a number of fast growing internet platform companies which are private that could potentially list over the coming years.

As we can see, there are multiple factors, both long- and short-term, to explain north Asia’s stock market outperformance over the past 18 months. These factors also leave it well placed as we look ahead. Equally, there are reasons why the rest of Asia can play catch up. As equity investors, we’re seeking those companies, in whichever region, who have the best competitive positions and prospects for growth.

Please remember that the value of investments and the income from them may go down as well as up and investors may not get back the amounts originally invested.

Schroder Unit Trusts Limited is an authorised corporate director, authorised unit trust manager and an ISA plan manager, and is authorised and regulated by the Financial Conduct Authority. 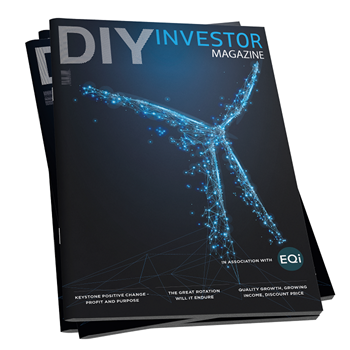