The Best Performing Investment Trusts Of 2020

I’ve been investing for over three decades and I don’t think any year has been as remarkable as 2020; there may be a lot of recency bias at play, but have we ever seen two such extremes in share prices, with both massive gains and massive losses?

Crises of markets past

I was in nappies during the savage market crash of the early 1970s, which sounds like a distinct advantage.

I don’t recall much about the crash of 1987 either; I was holding a collection of the standard privatisation shares at the time — British Gas, British Telecom, and BAA – and collected my dividends twice a year and checked their share prices about as often.

In the mid-90s I became a much more active investor but don’t remember much of a split market during the Asian Crisis of 1997-98.

With the Internet in its infancy, Information was harder to get hold of then; the most up-to-date information I got as a private investor was via Ceefax, which provided selected share price updates every couple of hours.

I recall the bear market of 2000-3 saw a noticeable split, with technology and biotech being trashed and traditional ‘value’ shares doing pretty well; but that was a much more drawn-out process compared to 2020.

The global financial crisis of 2007/08 knocked everything down but financials were the hardest hit and in many cases have never recovered; some banks like Lloyds trade at much the same share price now that they did in March 2009, the nadir for global markets.

Enough nostalgia; as I write, global markets are up around 10% for the year in sterling terms with dividends reinvested (what’s left of them).

Remarkably, most major markets are now positive for this year; Europe as a whole is flat but ahead if you exclude the UK, US is up 15%, China up 30%, and Japan up 9%.

How trusts have done

It’s a mixed picture for the investment trust sector; the AIC’s excellent interactive statistics resource tells me the average trust is up 15% over the last year - take off a few per cent for the rally at the tail end of 2019 and let’s call it 10% so far in 2020, much the same return as world markets.

However, this is a market-cap weighted average; the fact that many of the biggest trusts, like Scottish Mortgage, have had a bumper year makes a huge difference.

A straightforward average shows the investment trust sector has actually lost 3% so far in 2020 - 146 trusts are in positive territory but 196 underwater; only about 80 would have beaten a global tracker.

Drilling down into individual sectors reveals why many individual trusts have struggled.

The 65 companies in the various UK equity sectors make up about a fifth of all investment trusts, but their collective market cap of £17.5bn is only a bit larger than Scottish Mortgage’s £15bn; that surprised me.

There are around 40 property-related trusts, most focused on the UK, that have seen their share prices slump this year; debt trusts (around 30) have also been a tough place to make money and added together the property and debt sectors only amount to £17.5bn.

Put another way, the market cap gain of Scottish Mortgage in 2020 pretty much cancels out all the losses made by the 130-odd trusts in the UK, property and debt sectors.

Here are the best-performing investment trusts as of 16 November:

It’s no real surprise that Asia (especially China), tech and biotech are the three themes running through most of these winners.

Specialising in gold and precious metals miners Golden Prospect deserves a mention for leading the commodity sector this year. When gold surged through $2,000 in the summer, the trust was up 135% for the year, it’s slipped back since, but despite its gains still sits on a discount to net assets of 25%.

Hedge fund Pershing Square, run by Bill Ackman, is another one-off on the list. It rose 50% in 2019 and has repeated the feat, in 2020; Ackman bet that markets would fall when the pandemic began but profited from the recovery as well. With a market cap of around £6bn, it’s the third-largest trust after Scottish Mortgage and 3i.

JPMorgan has three trusts in this top twenty, which is admirable, but Baillie Gifford accounts for eight; as well as the trusts that carry its name, it also runs top-performer Pacific Horizon, Scottish Mortgage, Edinburgh Worldwide, and Monks.

The four other trusts it runs are also in positive territory, namely Japan (+21%), Scottish American and Schiehallion (both up 10%), and its UK trust (+7%).

Baillie Gifford’s open-ended funds have also done exceptionally well as many of them mirror the strategies used by its investment trusts; of its 23 open-ended equity funds, 22 have enjoyed a positive return this year.

Another notable theme across the top twenty trusts is that many are of significant size and have been around for a long time; Golden Prospect is the smallest at £30m but the next smallest are Augmentum Fintech (£190m), Montanaro European (£250m), Baillie Gifford China Growth (£260m), and International Biotechnology (£320m).

After that, we’re up to around £500m, which is the level many regard as the minimum necessary to attract interest from wealth managers and give a trust a better chance of long-term viability.

Eight of the top twenty trusts have a market cap in excess of £1bn; most of these have been around for at least a decade, and where they haven’t, you can trace their history back a bit further.

Baillie Gifford US Growth joined the market in 2018 but is closely linked in style terms to the open-ended Baillie Gifford American fund, which is over twenty years old.

Pershing Square IPO’d in 2014 but existed as a limited company for a long time prior to that; Augmentum Fintech was another 2018 newbie but started life as a partnership in 2009 with RIT Capital Partners as the sole investor.

Even in sectors that have struggled, there have been some notable winners; Triple Point Social Housing REIT and Aberdeen Standard European Logistics Income in the property sector are both up 28%.

RDLZ Realisation, a debt trust in the process of winding down, is up by the same amount.

Private equity trusts have seen their discounts widen this year with investors trying to get ahead of potential falls in their net asset values. But HgCapital has still been able to make headway, with its tech focus seeing its shares rise 21%.

Impax Environmental Markets, now valued at over £1bn, has had another good year, recording a 27% gain; although we have a rash of renewable energy infrastructure trusts, few managers seem to want to focus on equities in this area.

Emerging markets have had to play second fiddle to developed markets for a long time, but thanks to Asia’s good performance this year, they kept up pretty well; more established emerging market trusts have seen some nice increases and new-ish trusts have been among the best performers.

Fundsmith Emerging Equities is up 17% after its portfolio was streamlined and Terry Smith trimmed his involvement.

Mobius Investment Trust has risen 19% although that only takes its back to its IPO price of late 2018.

Nick Train has had a difficult year, by his own admission and by his very high historical standards; Lindsell Train Investment Trust is up 12% with its 10-year return slumping to a mere 620%. It’s still the fifth best-performing trust of the last decade. UK-focused Finsbury Growth & Income is down 2%.

Those with a year to forget

The two trusts previously run by Woodford protégé Mark Barnett have come back a bit under new management; Perpetual Income & Growth, formally merged with Murray Income since I collected these numbers, was down 19%, Edinburgh Investment Trust, now run by Majedie, was 12% in the red.

The old Woodford Patient Capital Trust, now Schroder UK Public Private, briefly recovered at the end of 2019 but it’s down 28% this year and still sits at a 40%+ discount; it will be a while longer before we know whether this trust can turned around.

Well-known UK equity income trust Temple Bar also changed manager this year; it is currently down around 35%, but was down 60% in March.

The three worst-performing trusts of 2020 have been propping up the performance tables for some time; JZ Capital Partners, an illogical mix of US property and micro-caps, has had difficulty with its sums and has fallen 72%.

KKV Secured Loan, a high-yield leasing trust that providing plant and equipment to a wide range of industries, has fared even worse; changing both its name and manager, its shares have slumped 82%.

Many commentators have highlighted the fact that the pandemic has accelerated trends that were already underway, and that seems to be true for investment trusts as well.

The top 20 list for this year almost looks like one that covers a five-year period, such are the size of the gains; I think 2021 could be an equally fascinating year for stock market nerds like myself.

Can the tech titans and disruptors continue to forge ahead now that widespread vaccine relief could be just a few months away?

Will the UK finally enjoy a long-overdue day in the sun once the final shape of Brexit is revealed?

And will we see beaten-down trust sectors rally due to waves of consolidation that narrow their discounts?

All of the above could even be true but I think I’ll leave precise forecasts to other folks. 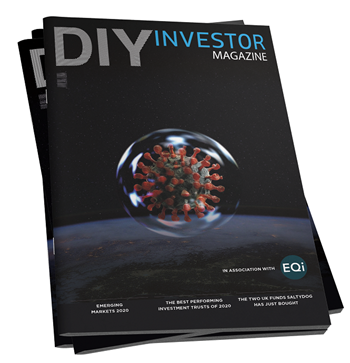