How Japan is making strides on sustainability

Europe is often held up as the ‘poster region’ of sustainable investing and it’s certainly true that ESG (environment, social, governance) issues are generally more embedded there than elsewhere. But Japan is far from a laggard in this area, particularly when it comes to the ‘S’.

In fact, Japan’s strengths on the social aspects of ESG investing long pre-date the current shifts towards sustainable investing. The concept of employees as a stakeholder is an important example.

Most employees in Japan would accept that the traditional idea of a ‘job for life’ is no longer a reality, but the underlying principle that companies will support their workforce is certainly still far more entrenched than in other regions.

In some aspects, many Japanese corporates do indeed have a good track record of looking after their employees. For example, in larger companies, such as Toyota, it’s still fairly common to offer dormitory accommodation for young employees.

From the company’s perspective, clearly this is designed to foster a sense of corporate culture and build loyalty to the firm. There are also many benefits for the employee as they can be partially sheltered from the high costs of relocating to a new position, as well as gaining opportunities to meet different colleagues.

There are nuances to the situation though. One is that the improved job security and the loyalty between employer and employee may effectively limit demands from workers for salary increases.

This has been a rational outcome during decades of deflation but, even now, as we are starting to see inflation pick up in Japan, wage demands have remained very muted, in contrast to other regions. It could be that workers are still prepared to trade a higher salary for greater job security, but companies will need to continue to uphold their end of that bargain.

Japan is also well known for a culture of long working hours, although ‘presenteeism’ (the need to be seen in the office) may become less prevalent after two years of frequent working from home during the pandemic. An encouraging point to note is that we’re starting to see more companies actively seeking employee feedback through formal channels, such as anonymous opinion surveys. As elsewhere, this trend is being driven by larger companies.

Hitachi, for example, has been reforming its business model throughout the last decade, and its early adoption of a global HR system has allowed it to engage more effectively with its employees. We also find many other traditional companies, such as Fujitsu and even the some of the largest banks in Japan, including labour employment surveys among their ESG disclosures.

A strong community focus is another area where we would argue Japanese companies have a sustainability edge. Even large corporates tend to have a ‘home base’ and strong ties to the suppliers and wider community around them.

While this is definitely a positive, there is still an important role for us to play, as shareholders, by encouraging companies to take a wider, more global, view of sustainability, rather than simply a local focus.

While there is always an important role for us, as shareholders, in encouraging management to take a broad view of sustainability, many Japanese companies themselves share a long tradition of commitment to society.

This is typified by Itochu, now a major global trading company, whose mission statement, for over 150 years, has aimed to unite the needs of the buyer, the seller and society.

FOCUS ON SHAREHOLDERS HAS IMPROVED

One area where we’ve seen clear improvement over recent years is in managements’ focus on shareholders.

The fact that Japanese companies are generally in good financial health compared to their counterparts in the US and Europe should help this trend to continue.

Clearly, the various waves of the Covid-19 pandemic have meant some disruption to companies’ capital allocation plans.

Nonetheless, in fiscal year ended March 2022, we have seen a strong pick-up in share buybacks and dividends despite the impact of the Omicron wave.

We would expect this trend to continue, and the initial evidence early in the current fiscal year is very encouraging.

The chart below indicates how dividends and share buybacks from Japanese companies look set to reach an all-time high in the 12 months to March 2023. 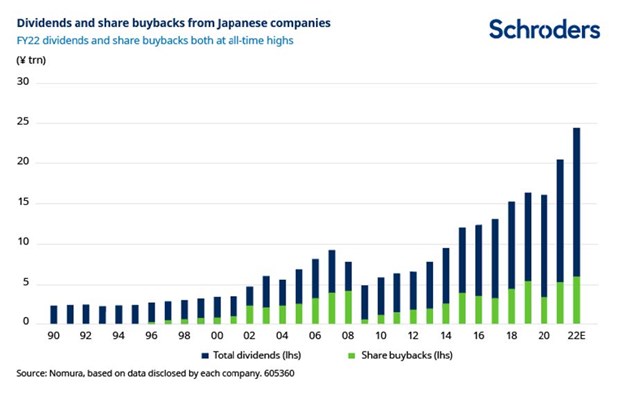 WORK TO DO ON DECARBONISATION AND ENERGY SECURITY

On other sustainability issues, however, Japan still has plenty of room for improvement. Energy security remains a concern a decade on from the major earthquake and associated nuclear disaster at Fukushima, which led to the shutdown of all Japan’s nuclear power reactors. Japan’s dependence on imported fossil fuels remains very high as a result.

That reliance is leading to some complicated trade-offs. For example, while UK firm Shell withdrew from the Russian LNG project Sakhalin-2 following Russia’s invasion of Ukraine, two Japanese trading companies remain invested in the project. Prime Minister Kishida recently indicated that there won’t be domestic political pressure on the companies to divest these assets.

Meanwhile, investment in a more resilient power grid is sorely needed. This was demonstrated in March when a combination of an earthquake and unexpectedly cold weather saw power reserves plunge. A blackout in Tokyo was only narrowly averted by residents and businesses heeding a government plea to limit electricity use.

As in the rest of the world, gas and electricity prices in Japan are rising and this is putting pressure on corporate profitability. Our analysts based in Japan are working hard to identify which companies have the ability to raise their own product prices to offset those higher costs.

BOARD INDEPENDENCE AND DIVERSITY REMAIN A CHALLENGE

Finally, mention must be made of the lack of diversity on Japanese boards. Different perspectives and opinions are essential for good decision making in any group, and help counter the risk of ‘groupthink’. Japan’s boards remain largely homogenous, dominated as they are by older Japanese men. Changing this will be neither quick nor easy. For example, companies will need to develop and promote more mid-career women so that they gain the experience required to sit on boards.

The language barrier, and the limited foreign representation in the workforce, also restricts companies’ ability to build cultural diversity into their boards.

But one positive sign is that corporate governance, including the push for greater diversity on boards, is now less a political issue than a regulatory one. The introduction of Japan’s Corporate Governance Code, and the related Stewardship Code, were initially driven by former prime minister Shinzo Abe.

However, subsequent revisions of the code are now being pushed through by regulators, rather than politicians, with a focus on strengthening the structure and functioning of boards, making core management more diverse and improving disclosure.

HOW WE ARE INVESTING

Of course, as stewards of our clients’ capital, we are using our voice (and our vote) to push for more progress on ESG issues. Currently we see numerous investment opportunities in the smaller, more domestically-focused end of the Japanese equity market. Such smaller companies are often those where we can have the biggest impact in terms of engagement on ESG issues.

This is partly because we may hold a larger position, giving us correspondingly stronger voice. Also, such firms may be at an earlier stage in formulating their own ESG positions and this gives us the opportunity to engage with them in terms of best practise, drawing on the resource and capabilities of both our local analyst team in Japan and Schroders’ Sustainable Investment Team.

Keep up to date with the latest Schroders news here

This communication is marketing material. The views and opinions contained herein are those of the named author(s) on this page, and may not necessarily represent views expressed or reflected in other Schroders communications, strategies or funds.

The data has been sourced by Schroders and should be independently verified before further publication or use. No responsibility can be accepted for error of fact or opinion. This does not exclude or restrict any duty or liability that Schroders has to its customers under the Financial Services and Markets Act 2000 (as amended from time to time) or any other regulatory system. Reliance should not be placed on the views and information in the document when taking individual investment and/or strategic decisions.

Past Performance is not a guide to future performance. The value of investments and the income from them may go down as well as up and investors may not get back the amounts originally invested. Exchange rate changes may cause the value of any overseas investments to rise or fall.

Any sectors, securities, regions or countries shown above are for illustrative purposes only and are not to be considered a recommendation to buy or sell.

The forecasts included should not be relied upon, are not guaranteed and are provided only as at the date of issue. Our forecasts are based on our own assumptions which may change. Forecasts and assumptions may be affected by external economic or other factors. 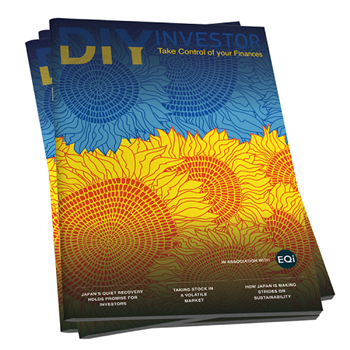